What Is Resonance Effect In Organic Chemistry

Differences Between The Inductive Effect And The Resonance Effect

The differences between the two are as follows.

A protonic acid is always in equilibrium with its conjugate base that is formed by loss of a proton. Any factor that stabilizes the negatively charged conjugate base favors greater ionization of acid. i.e increases the acidic strength.

The electron withdrawing groups showing negative inductive effect reduce the negative charge on the conjugate base by pulling the electron density and thus by stabilizing it. Hence the acidic strength increases when -I groups are present.

On the contrary, the +I groups decrease the acidic strength as they destabilize the conjugate base of acid by releasing electron density which in turn increases the negative charge on the anion and thus destabilizing it.

i) The acidic strength increases with increase in the number of electron withdrawing Fluorine atoms as shown below.

ii) Formic acid is stronger acid than acetic acid since the CH3group destabilizes the carboxylate ion.

On the same lines, the acidic strength of phenols increases when -I groups are present on the ring.

For example, the order of acidic strength following phenols is:

Thus the order of basic strength of alkyl and aryl amines with respect to ammonia is :CH3NH2> NH3> C6H5NH2

The electron withdrawing or releasing effect attributed to a substituent through delocalization of p or electrons, which can be visualized by drawing various canonical forms, is known as mesomeric effect or resonance effect. It is symbolized by M or R.

Negative resonance or mesomeric effect :It is shown by substituents or groups that withdraw electrons by delocalization mechanism from rest of the molecule and are denoted by -M or -R. The electron density on rest of the molecular entity is decreased due to this effect.

1) The negative resonance effect of carbonyl group is shown below. It withdraws electrons by delocalization of electrons and reduces the electron density particularly on 3rd carbon.

2) The negative mesomeric effect shown by cyanide group in acrylonitrile is illustrated below. The electron density on third carbon decreases due to delocalization of electrons towards cyanide group.

Because of negative resonance effect, the above compounds act as good .

This is the reason for why nitro group deactivates the benzene ring towards electrophilic substitution reaction.

What Is Resonance Effect

Resonance effect describes the effect on the stability of a molecule due to the interaction between pi bond electrons. Lone electron pairs can also contribute to the resonance of a molecule if there are any lone pairs present on atoms of the molecule. 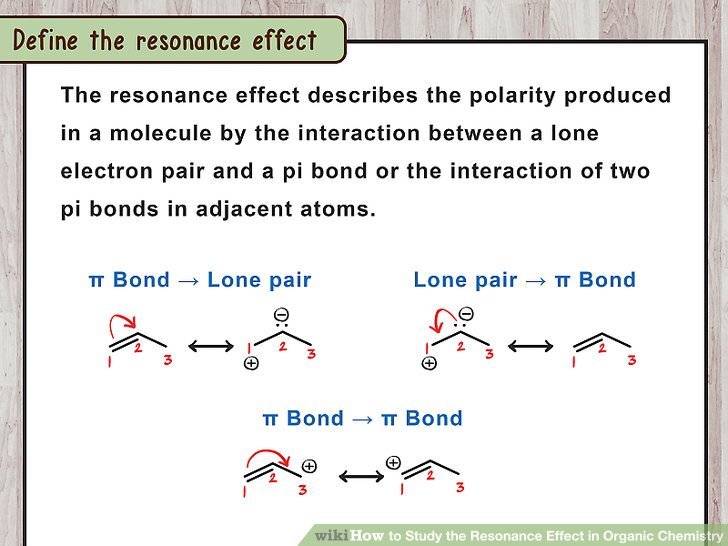 Recommended Reading: What Does Amu

In resonance structures, the electrons are able to move to help stabilize the molecule. This movement of the electrons is called delocalization.

What Is Inductive Effect

The inductive effect is found in two ways as follows.

Difference Between Resonance And Inductive Effect

How To Distinguish Between Electron

How do we distinguish between the electron-donating and the electron-withdrawing group on the benzene ring? To do this, look for double bonds in the substituents.

For example, the following substituents are involved as electron-donating groups on the benzene ring.

If we focus on the atoms directly bonded to the benzene ring , we find that they are all single bonds. As a result, these substituents are electron-donating groups on the benzene ring.

On the other hand, what if there is a double bond in the substituent? In this case, they act as electron-withdrawing groups.

The presence of a double bond allows electrons to be drawn into the substituent group by resonance. As a result, it becomes an electron-withdrawing group.

The C-Cl bond in the butyl chloride, CH3-CH2-CH2-CH2-Cl is polarized due to electronegativity difference. The electrons are withdrawn by the chlorine atom. Thus the first carbon atom gets partial positive charge. In turn, this carbon atom drags electron density partially from the next carbon, which also gets partial positive charge. This will continue further and is how the inductive effect is transmitted through the carbon chain.

One must note that the inductive effect weakens away along the chain and is not that much significant beyond the 3rd carbon atom.

Also note that inductive effect is a permanent effect and is inherent to the molecule, while the electromeric effect is a temporary effect is only created in the presence of attacking electrophilic or nucleophilic reagents.

Resonance has a deeper significance in the mathematical formalism of valence bond theory . Quantum mechanics requires that the wavefunction of a molecule obey its observed symmetry. If a single contributing structure does not achieve this, resonance is invoked.

For example, in benzene, valence bond theory begins with the two Kekulé structures which do not individually possess the sixfold symmetry of the real molecule. The theory constructs the actual wave function as a linear superposition of the wave functions representing the two structures. As both Kekulé structures have equal energy, they are equal contributors to the overall structure the superposition is an equally weighted average, or a 1:1 linear combination of the two in the case of benzene. The symmetric combination gives the ground state, while the antisymmetric combination gives the first excited state, as shown.

In general, the superposition is written with undetermined coefficients, which are then variationallyoptimized to find the lowest possible energy for the given set of basis wave functions. When more contributing structures are included, the molecular wave function becomes more accurate and more excited states can be derived from different combinations of the contributing structures.

What Is A Resonance In Chemistry

Regarding this, what is an example of a resonance?

What are the rules for drawing resonance structures?

Resonance Effects Take Into Account The Delocalization Of Electrons 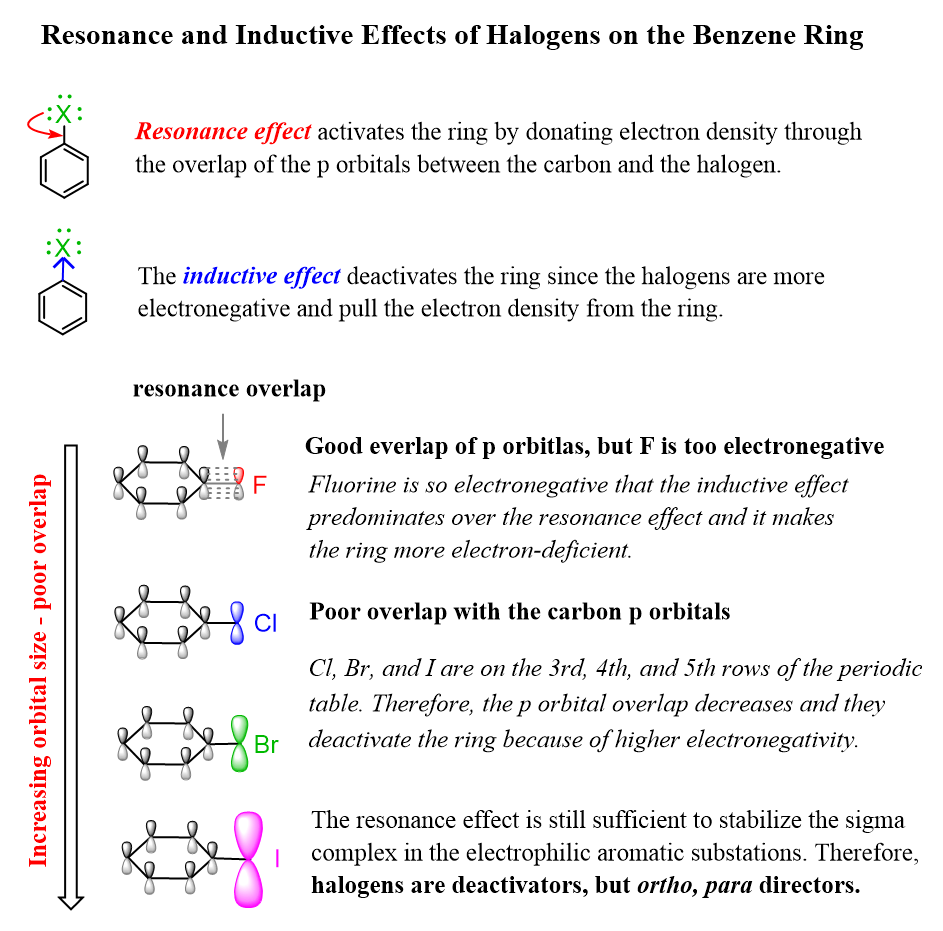 Among these double bonds, the resonance effect has a strong influence on the orientation and acidity of aromatic compounds . It is also responsible for the reaction rates of organic chemical reactions.

For compounds with conjugated structures, the resonance effect should be taken into account. Roughly speaking, we can think of resonance effects as those related to the reactivity of the benzene ring.

The Resonance Effect Is Stronger Than The Inductive Effect

Whereas, the -I groups destabilize the carbocations as they increase the positive charge by withdrawing electron density.

For example, the order of stability of a few carbocations containing alkyl groups is as follows:

In the same way the stability of free radicals increases with increase in the number of alkyl groups.

Thus the stability of different free radicals is:

Mesomeric Effect And Its Strength

While solving a question in organic chemistry, I needed to compare the strength of mesomeric effects of various groups. I looked it up on Wikipedia, and it goes like this :

First,let us look at some enthalpy values:

As you can clearly see, adding an electron to $\ce$ is an endothermic process, which means energy will have to be provided externally for pushing more electron density inside $\ce$.

That is pretty obvious as well, because you are forcing an electron into an already negative ion. It’s not going to go in willingly! The second electron affinity of oxygen is particularly high because the electron is being forced into a small, very electron-dense space.

Conversely, this means that the reverse reaction for will be pretty favorable, in the sense that $\ce$ will quite readily give away electron density to a suitable acceptor atom,as is evident from the enthalpy values. Hence, $\ce$ leads the charge in terms of +M effect

It is to be kept in mind that the factor of compatibility of overlap still holds. Donation from $\ce$ to, say, $\ce$ will still not be as effective as that to $\ce$

Resonance stabilization effect , as briefly mentioned in Section 1.3, is one of the fundamental concepts of Organic Chemistry and has broad applications. The discussion of resonance effect heavily relies on the understanding of resonance structures. Here we will focus on how to draw resonance structures for organic chemistry species, and how to compare the relative stabilities between the structures.